A second health worker in the US state of Texas has tested positive for Ebola, health officials say.

A 26-year-old female nurse is already receiving treatment after becoming infected by a Liberian man who died from the deadly virus last week.

US officials say they are monitoring 48 contacts of the Liberian national and the healthcare workers who treated him.

The World Health Organization (WHO) says 4,447 people have died from the outbreak, mainly in West Africa. END_OF_DOCUMENT_TOKEN_TO_BE_REPLACED

Timeline of cases and deaths

Data comes from reports by the Centers for Disease Control and Prevention[262] and the WHO.[263] All numbers are correlated with United Nations Office for the Coordination of Humanitarian Affairs (OCHA) if available.[264] The table includes suspected cases that have not yet been confirmed. The reports are sourced from official information from the affected countries’ health ministries. The WHO has stated the reported numbers “vastly underestimate the magnitude of the outbreak”, estimating there may be 2.5 times as many cases as officially reported.[10][11] Liberia was singled out in the October 8th report from WHO, noting “There continue to be profound problems affecting data acquisition in Liberia… it is likely that the figures will be revised upwards in due course.”[9]

The case numbers reported may include probable or suspected cases. Numbers are revised downward if a case is later found to be negative. (Numbers may differ from reports as per respective Government reports. See notes at the bottom for stated source file.)

A majority of Americans say the United States is ready for a possible outbreak of the Ebola virus, but only about one in ten say the country is “very prepared,” according to a new NBC News/Wall Street Journal poll.

The new poll shows that 56 percent of Americans say that the nation is prepared for an outbreak, while 42 percent disagree – including 20 percent who say that the U.S. is not prepared “at all.”

When I recently called for the resignation of CDC director, Dr. Tom Frieden, some of you may have thought I went too far. And yet here we are, facing startling claims that the Dallas medical staff who responded to the first patient diagnosed with Ebola in the United States – including a nurse who is now hospitalized with the virus – had limited protocols in place.

America, if you weren’t worried by Frieden’s inadequacy before, you should be now.

Salome Karwah, who survived Ebola, holds a baby being tested for the virus at a clinic in Monrovia, Liberia.

gets up and goes to work at the Ebola treatment unit where she watched her parents wither and die just three days apart and where she almost died of Ebola as well.

END_OF_DOCUMENT_TOKEN_TO_BE_REPLACED

(Reuters) – Colombia has begun denying entry to travelers who have recently visited West African countries affected by Ebola, Foreign Ministry sources said on Tuesday, the first Latin American country to do so.

The measure effective Tuesday applies to recent visitors to Sierra Leone, Liberia, Guinea and Nigeria, and was taken in response to a recommendation by the National Health Institute to prevent the virus spreading, sources at the Foreign Ministry not authorized to speak on the record told Reuters.

END_OF_DOCUMENT_TOKEN_TO_BE_REPLACED

A union that says it represents nurses in every state criticized the Dallas hospital where an Ebola patient died and where a nurse was sickened, saying that protocols to protect workers were not in place at Texas Health Presbyterian Hospital.

National Nurses United, in a conference call with reporters Tuesday, said that several nurses at Texas Health Presbyterian complained of confusion in the days after an Ebola patient was diagnosed there, putting nurses at risk, and that there was little training. END_OF_DOCUMENT_TOKEN_TO_BE_REPLACED

DALLAS — The director of the federal Centers for Disease Control and Prevention said on Tuesday that the agency planned a more robust response to any future Ebola cases in American hospitals, saying for the first time that quicker and more concerted action on its part might have kept a Dallas nurse from becoming infected by the virus.

The acknowledgment came on a day when a nurses’ union released a scathing statement that it said was composed by nurses at the Dallas hospital where the nurse, Nina Pham, 26, contracted Ebola. The statement told of “confusion and frequently changing policies and protocols,” inadequate protection against contamination and spotty training. END_OF_DOCUMENT_TOKEN_TO_BE_REPLACED

CDC Director Dr. Thomas Frieden said Tuesday on “The Kelly File” that Ebola protocols are being improved after a Texas nurse contracted the deadly disease while caring for a patient, acknowledging something “clearly” went wrong in that case.

“We know how Ebola spreads, we know how to stop it from spreading,” Frieden told Fox News’ Megyn Kelly. “But clearly what happened at the hospital shouldn’t have happened. So we’re now looking at that and saying okay, what’s everything we can do to ensure that anytime someone is caring for Ebola their risk is kept to an absolute minimum.” 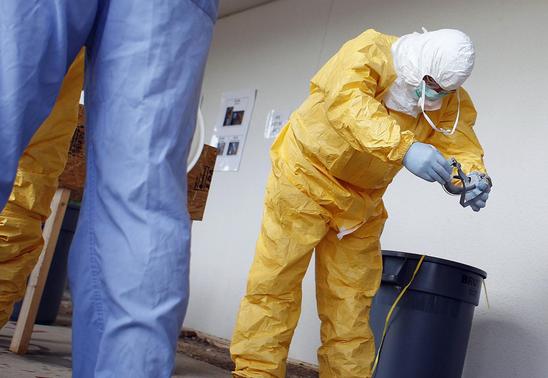 (Reuters) – The United States is establishing a rapid-response team to help hospitals “within hours” whenever there is a case of Ebola, the top doctor leading the fight against the deadly virus said on Tuesday.

Prospects for a quick end to the contagion fell as the World Health Organization (WHO) predicted that three impoverished countries in West Africa – Liberia, Sierra Leone and Guinea – could produce as many as 10,000 new cases per week by early December.