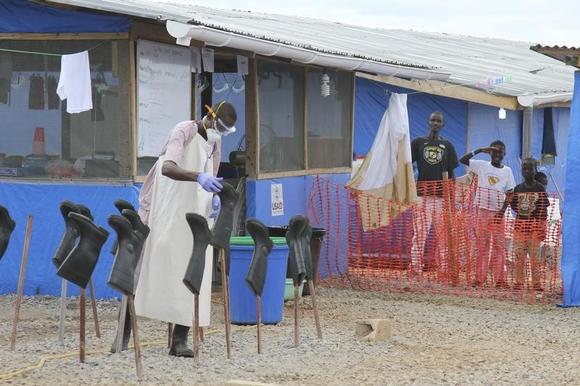 Boys Solomon (C, rear) and Joe (R, rear) stand in the ”red zone” where they are being treated for Ebola at the Bong County Ebola Treatment Unit about 200 km (120 miles) east of the capital, Monrovia, October 28, 2014.

(Reuters) – Just a few days after Solomon, 14, and Joe, 11, stood in t-shirts and pyjama pants waving as U.S. envoy Samantha Power visited an Ebola treatment unit in Liberia, their recovery was complete — they tested negative for the hemorrhagic fever.

Power, accompanied by U.S. public health experts, visited the treatment unit on Tuesday but did not enter the facility. She traveled to Liberia, Sierra Leone and Guinea to assess the global response to the worst outbreak of Ebola in history.

From a distance, Joe and Solomon watched and waved at Power’s delegation from behind a neon orange fence at the “red zone” of the treatment unit.

U.S. Navy Lieutenant Commander Benjamin Espinosa delivered the news to the boys on Friday that they were better, said International Medical Corps communications officer in Liberia Stuart Sia. Both Joe and Solomon went home to their villages on Saturday afternoon to be cared for by family, Sia said.

Espinosa, himself a father-of-four, is the officer-in-charge of a mobile laboratory set up in Bong County a few weeks ago that has cut sample testing times to five hours from five days.

But Solomon’s 7-year-old ‘social sister’ Christine, who’s mother raised Solomon as her own, is still fighting the virus that has gripped Liberia, Sierra Leone and Guinea, killing some 5,000 people and infecting thousands more.

“Christine is up and down. Ebola and children is harsh. We want her to pull through, but her tiny body is ravaged. She is eating and walking, and she hasn’t done much of either in weeks,” Mulrooney told Reuters in an email.

These improvements though in the past few days left the nurses confident that Christine will recover, said Sia in an email. Solomon and Christine both arrived at the treatment unit about two weeks ago from Joblo in Margibi County, he said.

However, Christine’s 10-year-old biological brother Rancy, who was admitted three days earlier than Christine and Solomon, died from Ebola within a week of being admitted for treatment.

In total, Sia said 14 members of their family had been infected. Joe, who comes from Weala in Margibi County, had also been in the treatment unit nearly two weeks.

After Power’s brief visit to West Africa, she told Reuters on Thursday that she had found some “hope and possibility” that the global response to the Ebola outbreak is working, but more resources are needed.