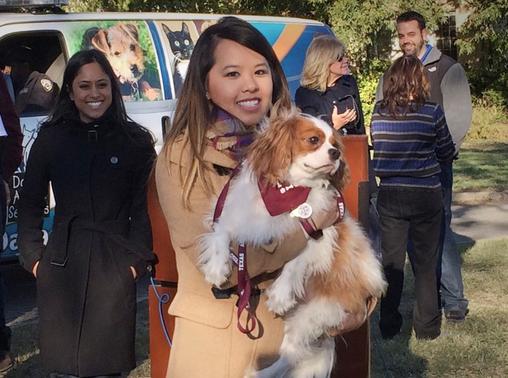 (Reuters) – The Dallas nurse treated for Ebola had an emotional reunion on Saturday with her “best friend”, a King Charles Spaniel, after the pet spent the last three weeks in quarantine being monitored for the deadly virus.

The dog named Bentley showered Nina Pham with licks at a handover ceremony near the Dallas shelter where he had been kept in isolation and cared for by kennel workers in protective suits.

Pham, 26, became the first person in the United States to be infected with Ebola after treating an infected man. She was released from a National Institutes of Health hospital in Maryland on Oct. 24 after being declared free of the virus.

“After I was diagnosed with Ebola, I didn’t know what would happen to Bentley and if he would have the virus,” Pham told reporters. “I was frightened that I might not know what happened to my best friend.”

Bentley has been under the spotlight after officials in Madrid put down the dog of a Spanish nurse who contacted Ebola while also caring for a patient.

Wearing a maroon handkerchief around his neck and a silver bone charm on his collar, Bentley licked Pham’s face and wagged his tail as he was cradled by the nurse in front of the cameras.

The dog was fed by decontamination crews working to clean Pham’s apartment shortly after she was diagnosed with the virus and later evacuated by a small team wearing protective gear.

Bentley became a minor Internet star as picture and videos of him running around his isolation call and playing with workers in space suits were released by the city – after they had first been shown to Pham.

Bentley was declared Ebola-free at the end of October after clearing several tests.

Pham said the two were now going to celebrate.

“Right now, I’m just excited to take Bentley home so we can start picking out his gifts for his 2 year birthday party this month,” Pham said.