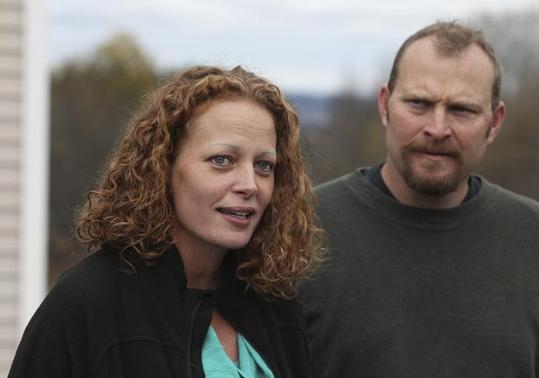 (Reuters) – A U.S. nurse who challenged quarantines of health care workers returning from treating West African Ebola patients said on Sunday she thought “an abundance of politics” lurked behind them.

Kaci Hickox has fought a heated public battle over what she considers draconian measures to isolate her for 21 days after her return from Sierra Leone, in a case that highlights the dilemma over how to balance public health needs and personal liberty.

“When Governor Christie stated that it was an abundance of caution, which is his reasoning for putting health care workers in a sort of quarantine for three weeks, it was really an abundance of politics,” Hickox said in an interview with NBC’s “Meet the Press”.

“And I think all of the scientific and medical and public health community agrees with me on that statement,” she said.

Christie has defended his decision to impose a mandatory three-week quarantine, saying that counting on a voluntary system may or may not work and that protecting health and safety is the government’s job.

The most deadly outbreak of Ebola on record has killed nearly 5,000 people, all but a handful of them in Liberia, Guinea and Sierra Leone.

Hickox tested negative for Ebola after returning recently from working for Doctors Without Borders in Sierra Leone. But she was placed in an isolation tent in New Jersey when she returned before being allowed to leave for Maine, which also sought to quarantine her at home.

A judge in Maine on Friday rejected that state’s bid to quarantine Hickox, instead imposing limited restrictions on her. The judge said that Hickox must continue direct monitoring of her health, coordinate travel plans with health officials and report any symptoms.

“We know a lot about Ebola,” Hickox told Meet the Press. “We know that it’s not transmitted from someone who is asymptomatic, as I am and many other aid workers will be when they return.”

Speaking to NBC from Fort Kent, Maine, Hickox indicated she would continue to stay away from crowds in her community, but that her partner, Ted Wilbur, should be allowed to go back to nursing school on Monday.

“I understand that the community has been through a lot in the past week and I do, you know, apologize to them for that,” she told NBC.

“I will not go into town, into crowded public places … But on the other hand, you know, my partner is currently in nursing school and there is definitely zero scientific evidence that says he shouldn’t be allowed to return to his campus on Monday.”

Only one person in the United States is currently being treated for Ebola, a New York doctor, Craig Spencer, who cared for patients in West Africa. His condition was upgraded by New York City health officials on Saturday to “stable” from “serious but stable” at Bellevue Hospital.

In Oregon, test results were awaited for a woman with a fever who was hospitalized in an isolation unit on Friday after returning from West Africa, Oregon health officials said.

She had not come into known contact with Ebola patients while in Africa, the officials added.

(Reporting by Susan Cornwall in Washington; Editing by Gareth Jones)

Ebola-carrying bats may be heroes as well as villains

71% Back Mandatory Quarantines for Ebola Workers: Poll
Scroll to top