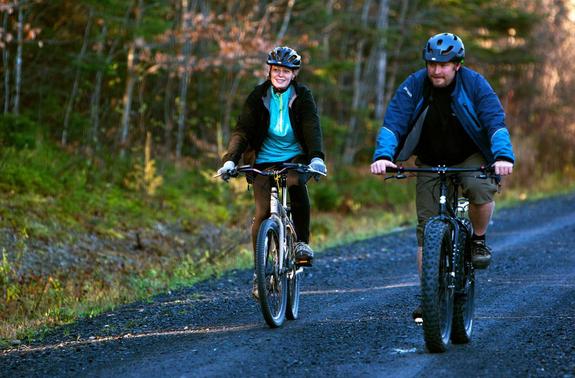 (Reuters) – A nurse who treated Ebola patients in Sierra Leone but has tested negative for the virus went for a bike ride on Thursday, defying Maine’s order that she be quarantined in her home and setting up a legal collision with Governor Paul LePage.

Attorneys for Kaci Hickox, 33, said they had not yet been served with a court order to enforce the 21-day quarantine – matching the virus’s maximum incubation period – but remained prepared to fight such an order if necessary.

LePage’s office said negotiations with Hickox, who worked with Doctors Without Borders in Sierra Leone, “have failed despite repeated efforts by state officials” and that he would “exercise the full extent of his authority allowable by law.”

The quarantine showdown between Hickox and Maine has become the focal point of a struggle between several U.S. states opting for stringent measures to guard against Ebola and a federal government wary of discouraging potential medical volunteers.

Mandatory quarantines ordered by some U.S. states on doctors and nurses returning from West Africa’s Ebola outbreak are creating a “chilling effect” on Doctors Without Borders operations there, the humanitarian group said on Thursday.

A California-based nurses union said it was organizing strikes and other protests against what it views as insufficient protection for nurses caring for patients stricken with the deadly virus.

Hickox left her home in the small Maine town of Fort Kent, along the Canadian border, and television news images showed her taking a morning bicycle ride with her boyfriend, Ted Wilbur. Hickox has given the New England state a deadline of Thursday to lift an order that she remain at home until Nov. 10, or she will go to court.

“It’s a beautiful day for a bike ride,” said Hickox, wearing a helmet and other bike gear as she headed out for her 3-mile (5-km) ride while police stationed outside her house stood by without trying to stop her, according to local media.

LePage’s office said he was open to an arrangement in which she could go for walks, runs or bike rides but not go into public places or come within 3 feet (1 meter) of other people.

President Barack Obama, who has criticized mandatory quarantine policies imposed by some states for returning medical workers like Hickox, flew to Maine on Thursday to campaign in the town of Cape Elizabeth for Democratic candidates, including Mike Michaud, who is trying to unseat LePage in Tuesday’s midterm elections. He did not address the Ebola issue in public remarks at a voter rally.

One of Hickox’s attorneys, Norman Siegel, defended his client’s decision to go for a bike ride but noted that she avoided the center of town so as not to “freak people out.”

“Since there’s no court order, she can be out in public,” Siegel said. “Even if people disagree with her position, I would hope they respect the fact that she’s taking into account the fear, which is based on misinformation about the way the disease is transmitted.”

Medical professionals say Ebola is difficult to catch and is spread through direct contact with bodily fluids from an infected person and is not transmitted by asymptomatic people. Ebola is not airborne.

U.S. concern about the disease is high even though there is only one person in the country currently being treated for it, a New York doctor, Craig Spencer, who cared for patients in West Africa. Spencer, 33, remains in serious but stable condition, New York’s Bellevue Hospital said on Thursday.

Hickox tested negative for Ebola after returning from Sierra Leone, one of the three impoverished countries at the heart of the outbreak that has killed about 5,000 people there.

She previously blasted New Jersey Governor Chris Christie after she was taken from Newark’s airport and put in isolation in a tent before being driven to Maine to spend the rest of her 21-day quarantine at home.

Such treatment of returning medics is affecting those still in West Africa, said Sophie Delaunay, executive director of Doctors Without Borders in the United States.

“There is rising anxiety and confusion among MSF staff members in the field over what they may face when they return home upon completion of their assignments in West Africa,” said Delaunay in a statement emailed to Reuters. Doctors Without Borders is also known by its French name, Médecins Sans Frontières, or MSF.

New York’s tough guidelines are also affecting diplomats. U.S. Ambassador to the United Nations Samantha Power returned to New York on Thursday after a brief visit to West Africa and must report her temperature twice daily to the New York state health department for the next 20 days.

Elsewhere, there were happier outcomes for people caught in the crossfire in the battle against Ebola.

A 7-year-old girl banned from attending school in Connecticut over fears that she may be carrying the virus after a trip to Nigeria will be allowed back on Friday, according to a joint statement by the school district and the girl’s father, who had filed a lawsuit to get the ban lifted.

Dallas nurse Nina Pham, who recovered from an Ebola infection, will be reunited with 1-year-old King Charles Spaniel on Saturday after testing indicated the pet was free of Ebola, a spokeswoman for the city of Dallas said.

With elections coming Tuesday, Republicans aiming to take full control of the U.S. Congress have made criticism of Obama’s response to Ebola – which they call inept and too weak – a part of their campaign message.

Some U.S. states have imposed automatic, 21-day quarantines on doctors and nurses returning from treating Ebola patients in Liberia, Sierra Leone and Guinea. Obama and other critics say such steps may discourage American doctors and nurses who are desperately needed there from volunteering.

Confusion over how to treat potential Ebola carriers in the United States is mirrored across the Americas, according to a meeting of health experts in Havana, Cuba, on Thursday.

“Everyone agrees they must be watched. How that is done is up to each country,” said Jorge Perez, director of Cuba’s Pedro Kouri Tropical Medicine Institute. “Every country is sovereign and can adopt the measures they want.”

New York City and state officials on Thursday announced a program to encourage healthcare professionals to work in West Africa, an effort to deflect criticism of the state’s mandatory quarantine.

A look at Ebola guidelines in some states