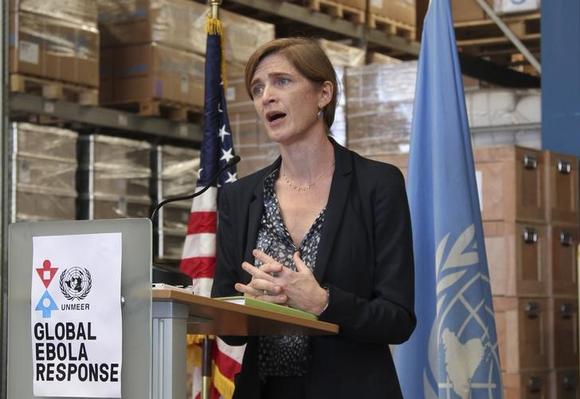 (Reuters) – U.S. Ambassador to the United Nations Samantha Power returned to New York on Thursday after a brief visit to Ebola-stricken West Africa and will report her temperature twice daily to the New York state health department for the next 20 days.

Traveling on a U.S. government plane, Power’s delegation did not come in contact with any Ebola patients during a visit to Guinea, Sierra Leone and Liberia, the three countries worst affected by the deadly hemorrhagic fever that has killed some 5,000 people.

Customs and Border Protection officers at New York’s John F. Kennedy airport took Power’s temperature and she then answered several questions about her health and whether she had come in contact with anyone infected with Ebola.

Ebola is spread through contact with bodily fluids of an infected person or the still-contagious body of someone who has died of the virus. It has a 21-day incubation period. Power left West Africa on Wednesday.

Several U.S. states, including New York where the United Nations is headquartered, have imposed a mandatory quarantine on healthcare workers returning from the region who had contact with Ebola patients.

Speaking in Brussels earlier on Thursday, Power said some countries had yet to shoulder their share of the Ebola response burden and some restrictions on aid workers returning home from West African nations hit hardest by the disease could deter thousands from helping. [ID:nL1N0SP3DK]

Soldier or civilian, Ebola protocols not the same
Scroll to top

THERE IS CURRENTLY AN OUTBREAK OF COVID-19 - CORONA VIRUS