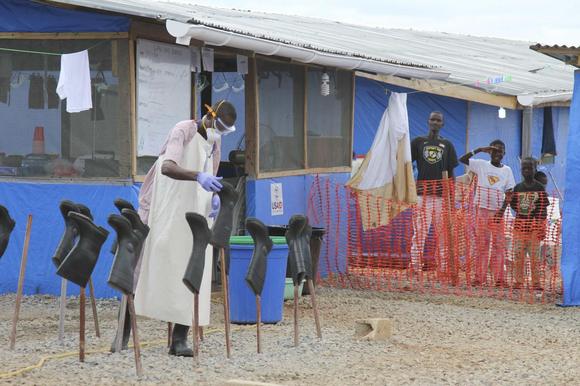 Boys Solomon (C, rear) and Joe (R, rear) stand in the ”red zone” where they are being treated for Ebola at the Bong County Ebola Treatment Unit about 200 km (120 miles) east of the capital, Monrovia, in this October 28, 2014 file photo.

(Reuters) – For the past five weeks U.S. Navy Lieutenant Commander Benjamin Espinosa has been testing blood samples for the deadly Ebola virus at a mobile laboratory in Liberia.

Liberia, Sierra Leone and Guinea have been gripped by the worst outbreak of the hemorrhagic fever on record. The laboratory in Bong County, about 200 km (120 miles) east of the capital Monrovia, has cut testing time to five hours from five days.

Nearby patients are being treated in the Bong County Ebola Treatment Unit (ETU).

“When I first arrived and visited the ETU, seeing the actual people that were relying on our work … it changed me. Now when we work in the lab, we see the person behind the sample and know that their lives could depend on us. It drives us,” he told Reuters in an email on Sunday.

Espinosa, a father of four originally from Colorado, is due to leave Liberia shortly. On Friday he unexpectedly got to deliver the news to Solomon, 14, and Joe, 11, that they were now Ebola-free.

“Joe and Solomon were already at the barrier fence (when we arrived). I’m sure someone told them we had something to tell them,” Espinosa said. “When we walked up they were dancing to music that was playing from a radio inside the Confirmed Ward. They are actually very impressive hip hop dancers.”

“‘Today you are finally cured! You have no virus left inside of you. You can go home,’” Espinosa said he told them. “People started clapping for them, the boys started clapping and smiling and one asked if he could leave right then. They were obviously very excited and happy.”

Joe and Solomon had been treated in the Bong County Ebola Treatment Unit for several weeks and went home on Saturday.

Espinosa said he had a hard time controlling his emotions as he told the boys.

“When I see the ages of the children that we test it’s very hard not to visualize my own children sick, in pain, and isolated there with no one to comfort them. It kills me,” he said. “So, telling these boys, who are the same age as mine, was amazing.”